This past Saturday night, alumni gathered at the home of Bruce and Debby Bleiweis in Northern Westchester to reunite with old friends. A mixture of friends were present, some from all the way back in the 60’s (including Bruce’s counselor when he was in unit I – ‘The Legend’ George Prinz and his wife, Susan). Also present was Irene Goldberg Drantch, a fellow alum that Debby has called a friend since they met at age 6 and 7, respectively!

Many others pictured above were present as well, whom the Bleiweis duo has not seen in years, some even decades! A highlight of Bruce’s was having the chance to reunite Bruce Drantch (a unit I counselor in ’73) with one of his campers Barry Greenblatt, who traveled from North Carolina to attend the event. Also in attendance were Ken and Sharon Brecher, Lenny Hershman (one of Bruce’s waiters when he was the Waiters’ Counselor in ’74) and Cindy Valk and her husband. While he did not attend camp, his three kids did in the ’90’s.

A wonderful group was in attendance, who look forward to many more reunions to come! 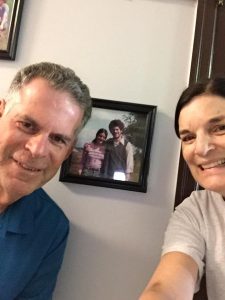 Bruce and Debby Thursz Bleiweis, pictured above, hosted the event in their home. The two, whom were Pioneers in 1971(!) met at camp and are one of the 41 Perlman couples who credit camp with introducing them to each other.