We are so excited to have Carrie Mildner and Rachel Hammer (who have been friends for over 14 years) back this summer to run our Taste of Perlman weekend. Campers have 3 jam packed days to try out activities across camp and fall in love with what it means to be a part of the Perlman family. Click below to find out more! 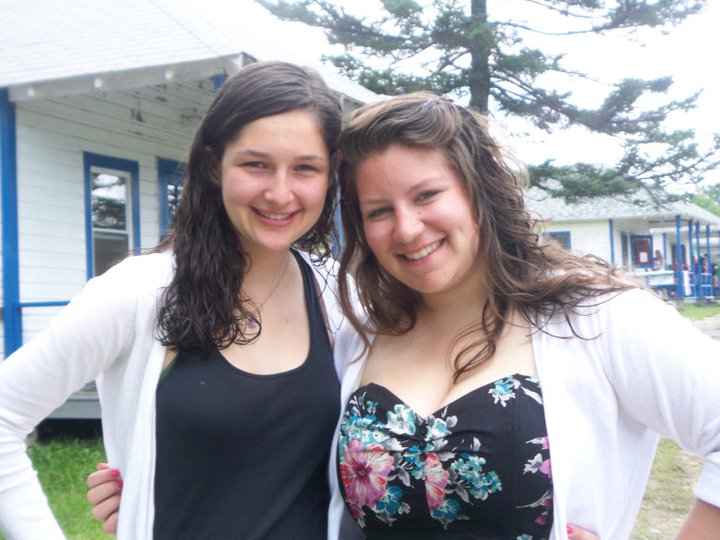 We both grew up at camp, and then continued going back as counselors and then leadership staff. For the last few summers, we haven’t been able to go back to camp due to graduate school, and now our jobs. Camp is our favorite place in the world, our second home. So naturally, we were upset, and honestly a bit lost when we couldn’t return to camp. How do we spend a summer at home? At that point, it was 12+ years since we did that. Luckily, we spent the summer as roommates, so we still hung out and pretended we were at camp all summer long. We planned on going to camp for visiting day and the alumni weekend (Shameless plug for the 2016 reunion…August 12-14th).  We savored every chance we had to visit, which is why we were thrilled when Jackie asked us to be counselors for the Taste of Perlman weekend. Another opportunity to be at camp, score! When we were staff at camp, both of us put in a great deal of effort to ensure that campers left camp at the end of the summer with a greater sense of self and independence, new forever friendships that felt like family (like ours), and a love for all the unique camp traditions. It is such a special and meaningful place to us, and we wanted campers to be already counting down the days until next summer on their bus ride home at the end of the summer, just like we used to. Taste of Perlman gave us an opportunity to give prospective campers a taste of the magic that is Perlman Camp.

As counselors of the Taste of Perlman weekend last summer, we quickly learned that “Taste of Perlman” is the perfect name for a weekend when prospective campers come to camp for a weekend. Some parents may think it isn’t necessary to spend an entire weekend at camp in order to determine if Perlman Camp is the right fit, and that a traditional tour would suffice for this purpose. Going off of the senses theme, a traditional tour is simply a “smell of Perlman.” Yes, tours are great to see the facilities, and gain information about logistics and activities at camp; however, during tours, parents and campers watch camp from afar without actually becoming involved in the magic of camp, without tasting camp. The Taste of Perlman weekend allows children to experience what happens beyond camp activities: independence, friendship, and tradition. It is an opportunity to truly understand why Perlman Camp is such a special place, a home away from home.

From the very beginning of the weekend, it was clear that the Taste of Perlman campers were gaining a greater sense of independence. Sleeping in a bunk without their parents meant making their beds by themselves, unpacking their own belongings, and setting the table for meals independently. Of course, we were there to help, but part of gaining independence is allowing campers to try performing these tasks first. When campers asked for help, we were happy to help, without doing it for them. We gave them step-by-step instructions while demonstrating how to perform these tasks. When the campers got the hang of a task that was a challenge to them, they were so proud, and asked us to watch them do it themselves. They even helped their new friends with these tasks too! It was evident that these campers became skilled at new tasks, which could be carried out in their lives outside of camp. This allowed campers to step out of their comfort zones of having others perform these tasks for them. The campers also stepped out of their comfort zones by trying new activities, such as a creek walk. Many of the campers had never been on a creek walk before, so walking through a creek in rain boots seemed like a strange concept. Aside from this being a new and maybe strange sounding activity, the campers were eager to try it. While an outdoor adventure specialist guided us through the creek, the campers were excited when they saw various animals in the creek, such as fish or frogs. Although we were walking as a group, each camper noticed different animals, and other aspects of nature. As campers saw things that interested them, they excitedly called out for everyone else to come and see. This really highlighted the beauty of camp: gaining independence, while building strong bonds with others.

It’s crazy to think how fast close and meaningful friendships form when at camp. Typically, it takes a good amount of time before people feel a strong bond with someone. At camp, however, everyone lives together, and shares everything with each other, from tangible items such as the actual living space, clothing, and even a canteen snack, to intangible items such as stories, laughs, and the overall camp experience. The friends we met at camp are really the only ones we can talk to about camp. No one else truly understands why living with friends and doing activities, such as outdoor
adventure and lake, are so special. During the Taste of Perlman weekend, we watched as these friendships sprouted (like the snow peas in the Amir garden), even though the campers shared one short weekend together. By the first night, Friday night, the prospective campers were making the most of flashlight time (a time to wind down before bed). They were sharing stories about their family and friends back home, and giggling about things that happened that day at Shabbat dinner and Israeli dance. Saturday morning, the group had outdoor adventure. They were already taking pictures of each other on the rock-climbing wall, so that they could remember the friends they met over the weekend. Without our encouragement, they also started to cheer each other on as they were trying to get up the rock-climbing wall. This cheering was really sincere, as they truly cared about their new friends succeeding, by reaching the top of the rock-climbing wall. On Sunday, when parents came for a tour and to pick their children up, the prospective campers were so excited to introduce their new friends to their parents. This made us feel overjoyed, because they really experienced a taste of the Perlman Camp community: friends that are like family.

There are so many unique, fun, and memorable traditions that make Perlman Camp special. Many of these traditions are what make Shabbat at camp so special. What better way to experience some of camp’s traditions than being in a bunk with campers who have been there all summer?! These campers welcomed the Taste of Perlman campers to camp with open arms; quite literally, as they gave them hugs as they arrived to make them feel welcome. As the Taste of Perlman campers walked into the dining hall for Shabbat dinner, they were struck with many new camp traditions: What’s a hopper? What are all these handmotions everyone is doing during the Birkat Hamazon (prayer after the meal)? I don’t know this birthday song, and whoa there are hand motions that go with it!
This could seem overwhelming, since Taste of Perlman is only a weekend, which is not a long time to learn these traditions. The full session campers, however, made this easy. They explained: everyone has a “job” every day to make sure the bunk is neat, and a hopper is someone who is assigned to set the table. They further showed them when to use certain hand motions during the Birkat Hamazon to make this prayer more fun and spirited, and where in the dining hall the words to the birthday song were hanging and which hand motions went along with it. This real time demonstration continued during Israeli dance, when the Taste of Perlman campers were exposed to new songs and unfamiliar dances. By Saturday, the Taste of Perlman campers started to get the hang of these new traditions. By the time their parents came on Sunday for lunch, the Taste of Perlman campers were excited to teach their parents the hand motions that went along with the Birkat Hamazon. They got up and sang the prayer accompanied with the hand motions with excitement and confidence. Throughout the weekend, these campers learned Perlman traditions, and embraced them as their own, as they were now part of the Perlman Camp family.

We are so excited to be counselors for Taste of Perlman again this coming summer! Our goal is to help prospective campers have a fun, memorable, and enriching weekend so that they leave counting down the days until they are campers in summer 2017 at Perlman Camp!

Taste of Perlman will be held from July 22nd-July 24th for any camper entering 2nd-5th grade. Sign up here!